We changed our name to “Dead Sinners”

On July 5th, 2010, the group had the great opportunity to be the opening act for legendary guitarist Slash (former guitarist of Guns’n’Roses) at Rockhal in Luxembourg. After the success of this concert, the group’s reputation increased rapidly gaining much notoriety within the Rock scene. 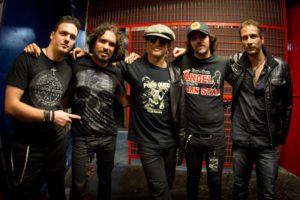 For the first quarter of 2012, the group was invited to play a European tour with American rock guitarist Richie Kotzen (ex-member of “Poison” and “Mr. Big”) playing 16 gigs in 12 countries, covering Luxembourg, France, UK, Netherlands, Germany, Czech Republic, Slovakia, Hungary, Austria and many others.